A Day Blessed by Pats Mom

Up bright and early this morning the birds were singing and i just had that spring in my step i still get that buzz after 40+ years of fishing the thought and expectation of what lays ahead in the day to come,coming down to Cians house i promised i would give him a knock rattling on the door and what a sight to behold the man himself donned in his light blue Lycra bedtime shorts!with bags under the eyes as big as one of my peeler crabs don't you just love him,!!
we met pat and his nephew jack down on the beach and them three opted for the crab bait and i went off on the soft plastics,
immediately on the first cast a Bass of around 3.8oz came on pats bait rod which he very kindly let young jack reel in and land his first ever bass and he is only 9 years old well done jack 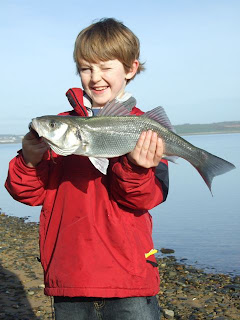 Jack above with second of 3 fish he nailed today not bad for a first time effort on the bass,,This was starting to look good today there seemed to be a few fish moving around i had been walkabouts and falling out with a dog walker (threatened to throw him in the drink if he diddent stop chucking cobbles in the water for his dog)and ended up where i started at the beginning of the morning reading the water where two channels meet ,the water was gin clear in the late winter sunshine so i opted for the fluro leader on to the well proven blue pearlessant GT Shad on a articulated jig head the boys were still bait fishing as i persisted with the soft plastics i was fishing the shad a very particular way a trotting sink and slow draw is a very effective method i had seen a couple of fish moving so my confidence was high and concentration was just automatic in the winter sunshine working the plastic on and off the bottom then the sutler resistance of a take !! i lowered the rod tip instantly and drew the shad slowly again by raising the rod tip from slow to strike mode in one lift and bang the fish was on and within a few seconds i knew that this was no small fish,,could it be one of them november crocs??as it broke the surface whoo!!!!IT SURE WAS and for the time of year this was sure a fine specimen that was putting up a fantastic scrap 10mins later it tipped the scales at 10.01oz and my first fish on a lure this year and a double at that!! a very thick set sparkling silver fish


here's a couple of pics below 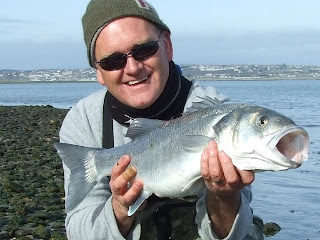 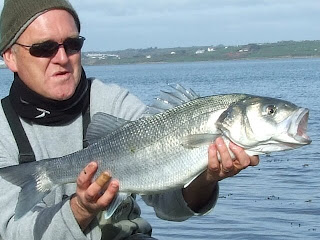 I was absolutely over the moon what a fantastic fish for this time of year a couple more casts and oh!!my god i was in again another fine fighting bass a fish weighed at 7.6oz again on the GT Shad what a lure this is turning out to be the boys were looking a little nervous down to my right on the bait i could see the red rods twitching in the wind as the were been made for action 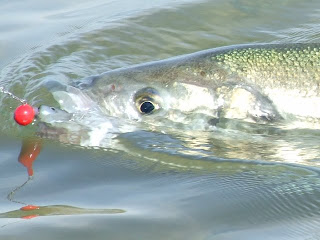 Above the bass clearly has a firm hold on the GT Shad the articulated jig head is plain to see and the reflection in the water in the picture above,, Cian took this one during the fight watch out H
Could this day get any better?? it sure could !!hearing a call Cian was stuck into a nice fish his greys BZE was bucking with a sizable fish and oh yes a fish of around 7 lbs came to the shore on the scales it went 7.04oz what a fish great to catch on a light bait casting outfit and of course gees best peeler crabs 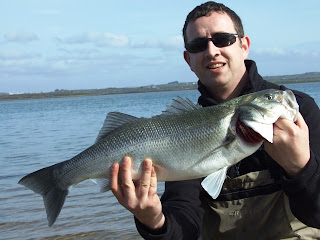 Look at the condition of that fish for march

After the photo call back to the business an believe this or not first cast with the GT shad bang a fish of 6.8oz 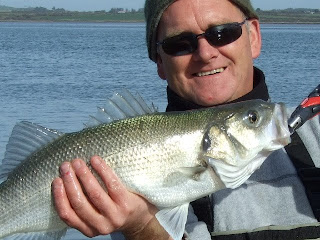 All this happened in an hour and what a magical hour for me and Cian poor old Pat was pulling his hair out ,,the slayers were just not doing the business today
towards the end of the day we started to have a go with other stuff ,when the fish are in front of you this is a must i got another bass 3lbs on a white slayer and pat nailed a bass of around 3lbs on a lucky craft flash minnow trout pattern ,,,,the theory today is that the Bass were feeding on trout and small mullet so the shads and the trout patt plugs work in these conditions this seems to happen in march april before the main peel of crab and the arrival of the bulk sandeels that is when the slayers will come into their own,,having said all that the ever trying pat puts on a mini asturi and misses one take and hits another off the top and looses the second fish after 30 secs but how cool is that!!!!! fish on the surface in march 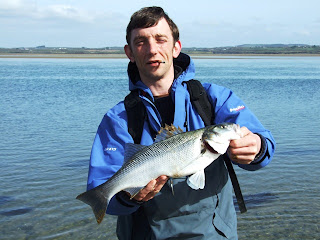 heres pat with that elusive 3lber on the flash minnow
In summary we had 10 Bass to 10 lbs and were blessed with the weather ,fishing , great mates and fellow fishermen i think someone was watching over us today a day never to be forgotten cheers Lads
gee
- March 15, 2009

PS leave some for me when Im over in July

Great blog Graham....it makes excellent reading. You've inspired me to get out and do some lure fishing. I've never done it this early. Been experimenting with plastics, bass assasins and the like. I'm trying a sink and draw technique at a local small estuary. Haven't had any success yet but I'll keep on trying.

Nice Blog Graham, looks like you guys had a good session. May I ask what sort of water temperature you have going on over there at the moment. 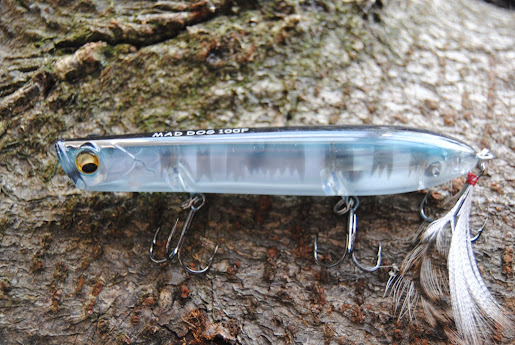 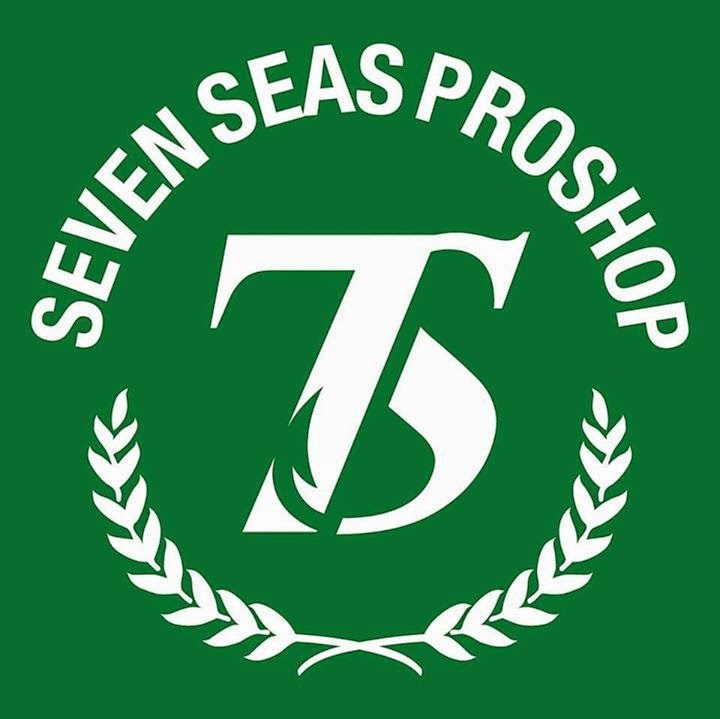